Story on my Desk


This item has been on my desk at work since I started working at Diamond Light Source. It has a little story behind it. The Name Murphy which you see on the hammer was given to me on the first week I started at Oxford Instruments and has been with me all my working life 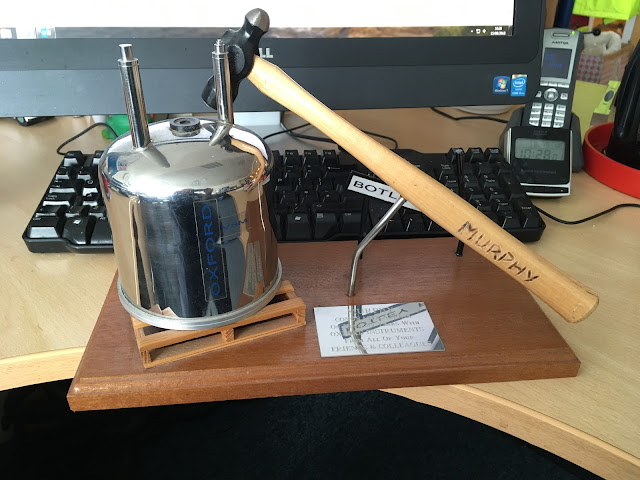 This was given to me to mark 25 years at Oxford Instruments which was a big occasion because if you had been there that long you were taken out for a meal at a place of your choosing. The trophy you see was made by my friends for me 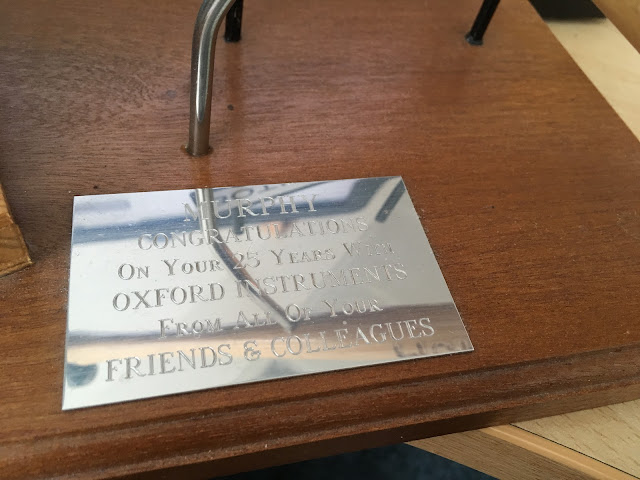 So what is the story behind it 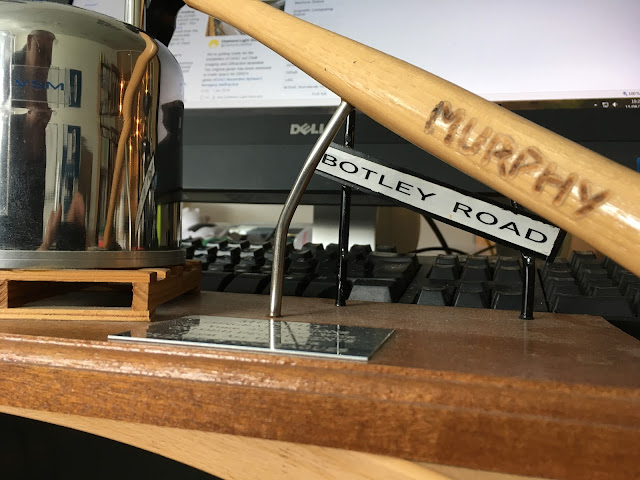 The one thing you might not see at first is the Botley Road sign which is slightly bent, the story behind that is a bit of a legend in Oxford Instruments.
Oxford Instruments rented an industrial unit in Minns estate where they wound magnets and tested some of the low temperature equipment. Once finished it was transported back to the main factory at Oxford Instruments in Osney Mead Indutruial Estate to be cleaned and packed before shipping on to the customer. On one occasion my apprentice (Jaffa) and I went down to Minns facility to collect some equipment to be shipped. It was taken apart and roughly assembled and put in the back of a Sherpa pickup truck, the largest part, the cryostat, was tied to some hoops by the cab. I drove down the access road of Minns industrial estate to the Botley Road and pulled out into the road before turning right to go towards Osney. Just as I turned the cryostat went out the other way and started rolling down the Botley Road towards Seacourt Tower. I had hardly stopped and Jaffa was out chasing it down the road where he caught up and managed to turn it towards the gutter by the time I had reversed up. We threw it in the back of the truck and headed back to work where I told the supervisor what happened. Before he could look the MD walked out and spotted it where he said something obscene and walked off. Two hours later he came back and told me to fix it. It was shipped three weeks later. I might add it came back for an upgrade and was shipped back to Berlin where I went to help install it. The last time I saw it, it was in Denmark. 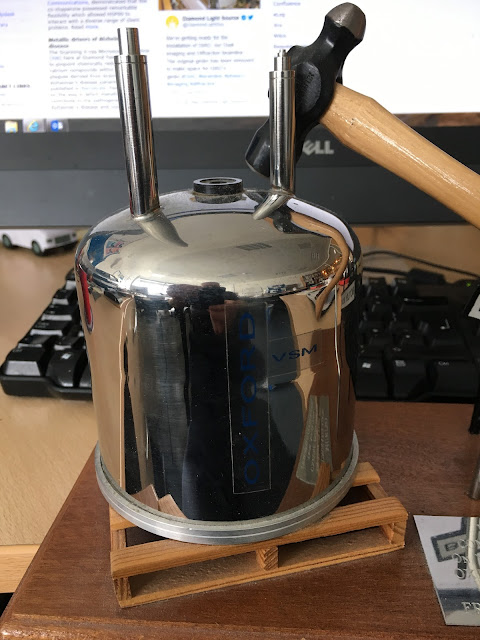 Now this item is Called a VSM or Vibrating Sample Magnetometer something I used to make at the time and install them, above it you see a Hammer. Now this could be one of two story's. First story:- I picked up a bit of a reputation using a hammer which was duly noted one day when I found some of my Colleagues trying to fit top plate on a magnet about the size of one you would find in a Body Scanner (OI came up with the body scanner). They were fighting it with clamps and beating the hell out of the plate to fit  it in the tube. I came along and see what they are doing, I then jump up on top of it and ask them for a mallet. (The mallet was the size of a sledge hammer that would have made Thor proud) and with one over head swing I hit the plate in one spot and it falls into place much to every ones surprise. When asked how I knew what to do I told them I worked for a blacksmith before I started working. I think I went up in their estimation that day.
The second story:- this could take came a short time after when some posters were put on the wall of the factory, one showed a photos of a VSM with the words Highly sensitive VSM. I wrote under it "Not after Murphy has hit it with his hammer" my boss walked past it and was shocked and said I'll sack who ever wrote this. He was even more shocked when I said I did. he walked off and never spoke to me for two weeks. Needless to say I did not get the sack and outlasted him at work.
So that is a little piece of my life that has sat on my desk now it will go with me when I retire the end of the week