I have to admit to being a petrol head all my life. It was not something that manifested itself until I was a round 15 and got a poster of a Lamborghini Miura, no way I would ever get one of those but you could dream. A few years later I started work as an apprentice and each day while I road along the Henley road to Crowmarsh I would see this Grey Haired Lady driving a Red & White Mini Cooper S. Now That was something I longed after but it was too expensive for my meagre wages I though why should that old lady drive around in something so good, what a waste. I go my mini a few years later but it was the normal one you cold get not the supped up one. I would have to wait a few years till I managed to get what I was after. As the years  went by so did my cars and I ended up with a more sensible car to take my family around in but it never stopped my love for Mini's, I sill had a one to drive around in then one day I found the dreaded tin worm had eaten some of the car and I had to rebuild it. Well that turned into a marathon and after four years the car came back out of the garage a shadow of its former self because I had built a bit of a monster that put out 120BHP I built the pocket rocket I always wanted.
My wife on the other hand drove something a little more sensible a Suzuki Swift. As it was I sold the Mini after owning it of 21 years and ended up getting a Black Suzuki Swift to drive around in (My wife by then had bought Suzuki Jimny). I had given up working on my own cars and servicing them preferring instead to have the dealer do it (they had become too complicated for me). Well my Swift needed a service and Nick the MD of the Sportif Suzuki Dealership picked the car up and dropped off another new Suzuki Swift in Black, which did not look much different to mine till I went around the back and noticed it had twin exhausts so knew it was the sport version. I had not seen this new version yet so gave it a looking at and thought why not review it. 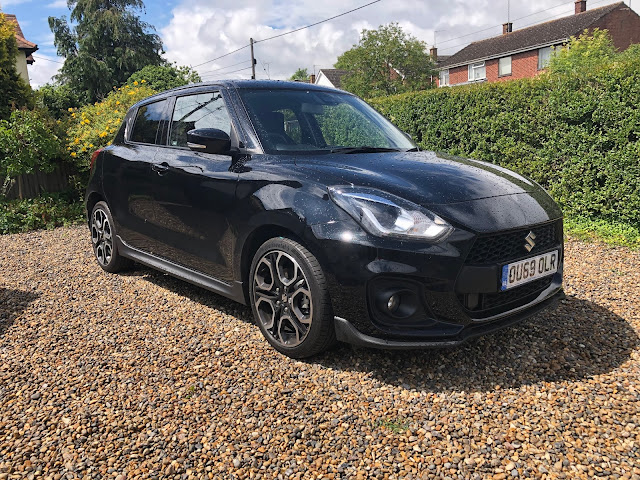 This is it the Suzuki Swift Sport, does not look like it from the front but believe me it packs a punch 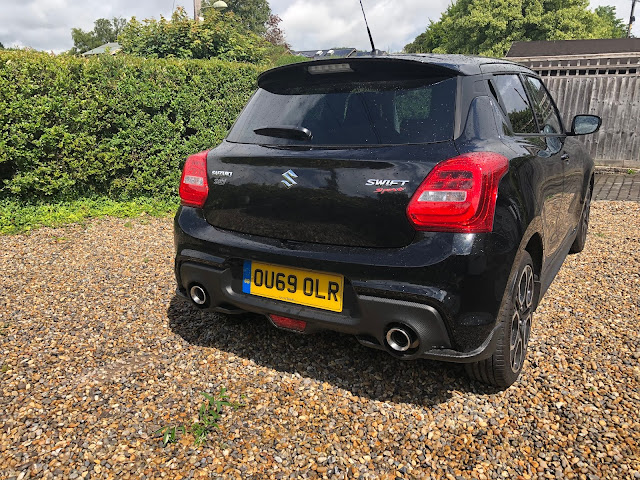 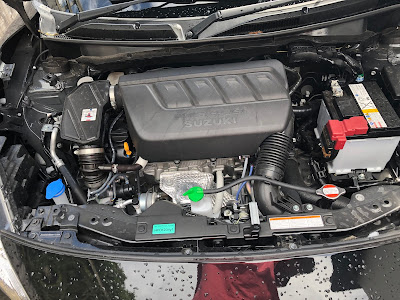 The engine under the bonnet does not look like much to see but produces around 127 BHP fast enough to propel you through the speed limit before you realise it. 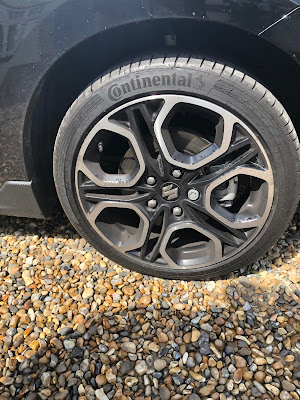 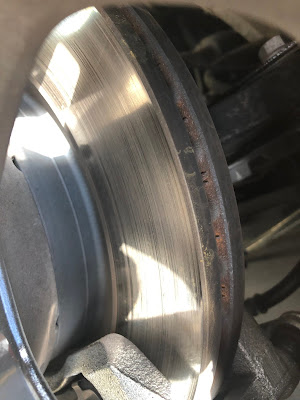 The car is kept on the road with Low Profile tyres on Alloy wheels and stopped by large ventilated disc brakes that are as big as the wheels on my First Mini. The rear brakes are discs as well 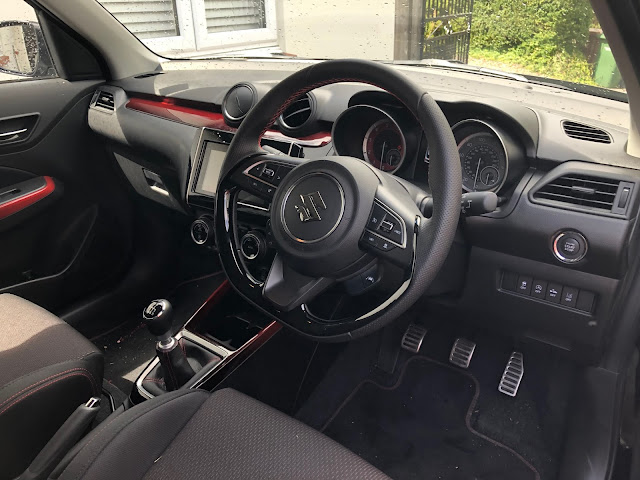 Inside you find a well laid out dash with easy to read dials. The gear leaver shows six forward and one reverse. Controls on the steering wheel for radio, Phone and cruse control. 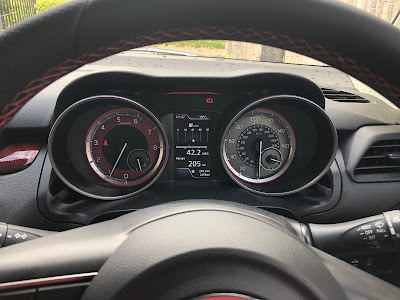 The readout you see tells you the car averaged 42.2 MPG which for this is respectable and far better that my Mini ever did 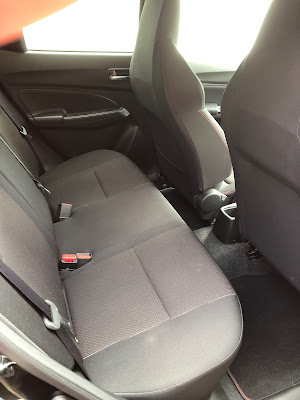 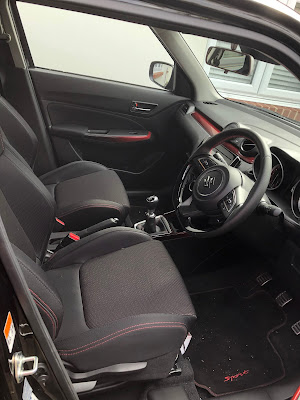 The front seats are comfy and go far enough back to allow you easy access to the controls. It allows Nick lots of room and he is over six Foot tall
I might add the rear seats are roomy and big enough for a couple of adults 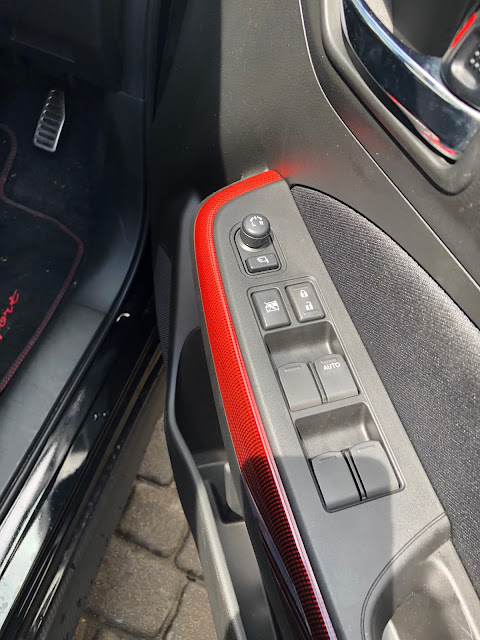 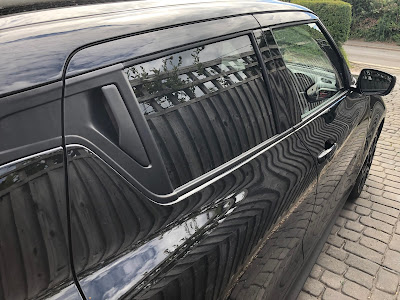 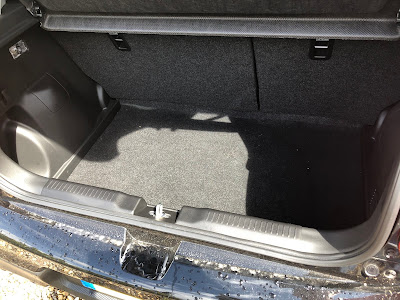 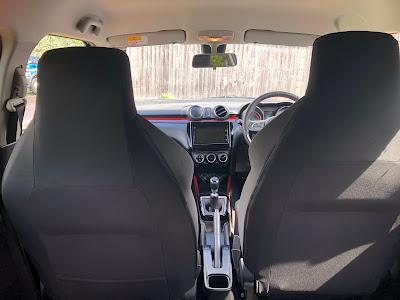 Looking through from the back to the dash.

The car has also got some nifty additions like lane departure warning, blind spot monitoring and road traffic sign recognition. Which are something my car does not have. The one thing I have neglected to tell you is what is it like to drive. Well I did not take this one out on the road but a couple of years ago Nick left me a Swift Sport to take home from Work (after he collected mine for service)  and I took it home. I thought I would give it a little go and was promptly reminded by my son I should go easy. It accelerates very quickly and handles like a dream around corners being very smooth on the road if a little harder on the suspension than mine. The breaks are very efficient stopping the car quickly. I would admit it would bring out the hooligan in you if you were in that frame of mind. The Mini I built was quick on acceleration and only a few BHP less than this one and handled like a go-Kart (they are called Karts really) and the Swift is very similar I will say and much more comfortable than my Mini ever was. Would I have one, yes (have to be Yellow) and I might even try and hide this one in the garage when Nick comes to collect it.
If you would like to purchase a Suzuki Swift like this one or any other car from the Suzuki range the pop along to Sportif Suzuki in Long Hanborough Witney where Nick and his staff will be only too willing to help you out. 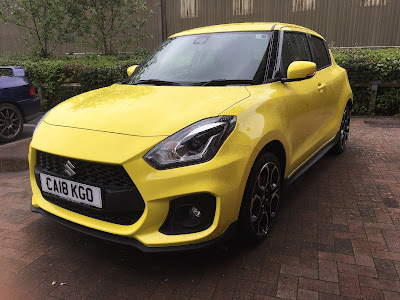