I had the chance of using a New Suzuki Jimny while my car was in for a service. The Manager Nick at Sportif Suzuik Long Hanborough  said he would love to know my opinion on the car. so I thought I'd do a review on it 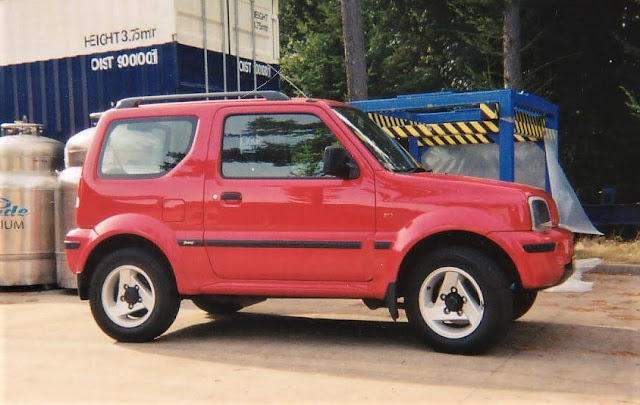 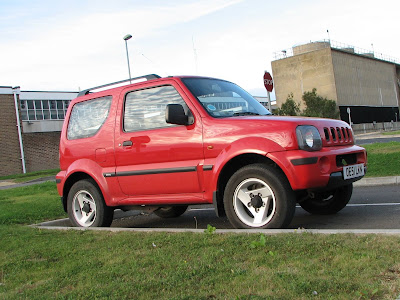 This was the first Jimny my Wife had which was bought back in 2001 It got passed on to me and I used it for travelling back and forth from work form many years. I sold it some time in 2008.

It was many years before my wife bought one on the colour she always wanted White. The only difference between the two is that hers has a fake bonnet scoop which they put on for some reason by Suzuki.
By the time the Jimny was 20 years old Suzuki decided it was time to replace the older version with something a little more up to date as the old one was not meeting the new regulations laid down by various countries. 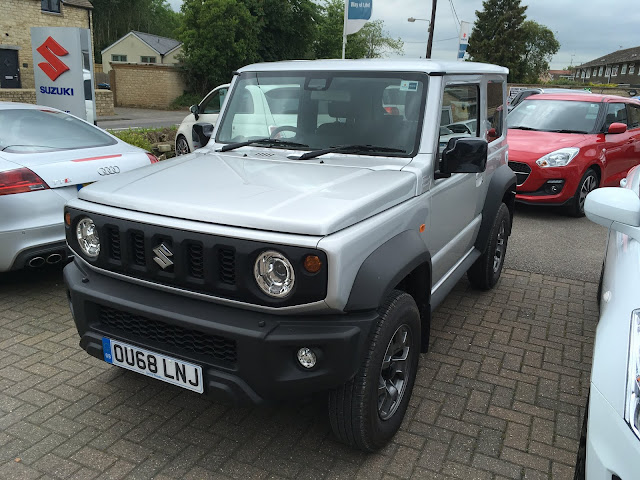 I think people at first were expecting something with a more radical design but in keeping with the way some manufacturers were going retro Suzuki went back to the old SJ range for the idea in looks, what came out was something that looks like a mini Landrover or G-Waggon, in fact a few after market places in Japan sell kits to make them look like those cars 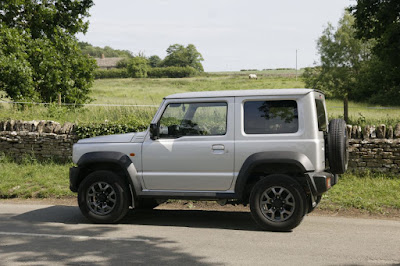 What is it like to drive, very nice actually. To start with it feels very similar to the one it replaces, the steering is positive and the car is more sure footed on the road. It accelerates smoothly and seems to have a little more torque that the old one but then it is 1500cc as opposed to 1300cc 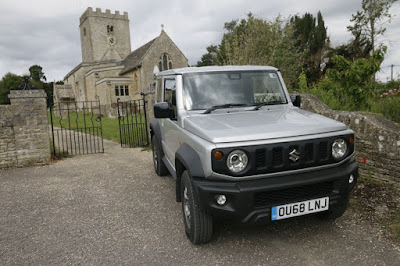 One thing I noticed was that the car did not roll as much as the older Jimny  and I found it easy to  reverse  up and park. You can see from the look of the car it is much squarer than the old one 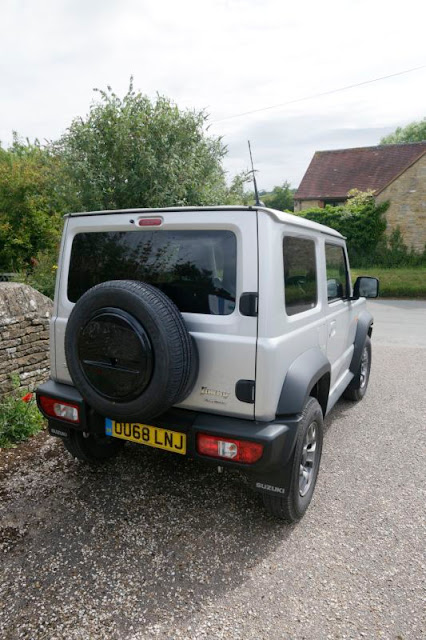 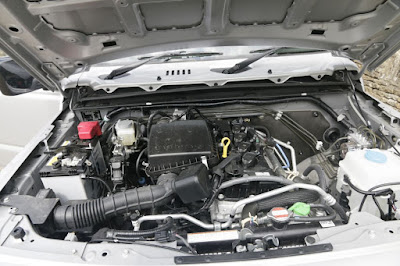 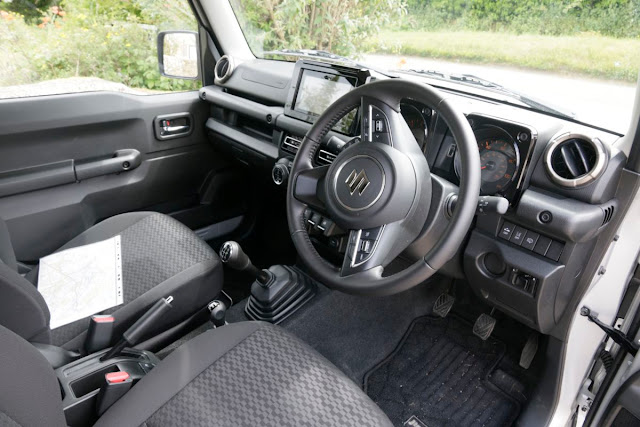 Inside the first thing I noticed was I had more room least it felt that way.
As in line with most modern cars you have a large multimedia display for Sat nav, radio, iPod, Blue tooth etc so no excuse for sticking a phone on your ear !!! there are no dials on it so I presume it is a touch screen though I never played with that. The steering wheel has the controls on it for the volume, that was one thing I was not keen on as I wanted to turn up the volume and found you had to push the toggle switch up or down, I think this could be a problem with it breaking. I would much rather have seen the set up I have on my old Swift. The speedo and rev counter are in front of you and easy to read. There is a fuel gauge that reads in a line showing bars that go out as it gets lower. That is another thing I am not keen on. I forgot to look at the temperature gauge but I did notice that when I went into a 30 limit you 30 showed up on the Multi Function Display in the dash centre warning you that was the speed limit you were driving in. 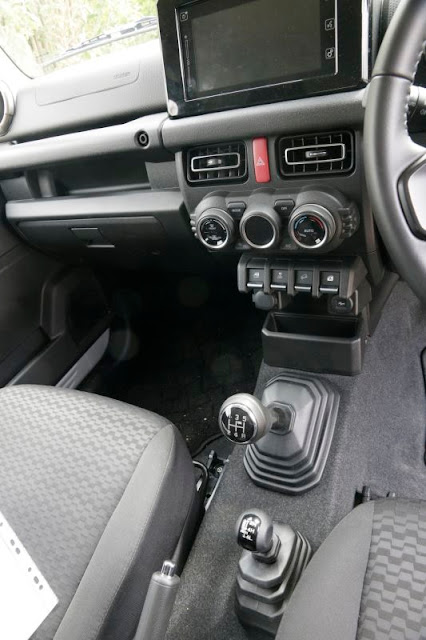 The gearbox is the conventional five speed but the nice thing is they have gone back to a second  to having a second sick to change the High & low Four Wheel Drive gears. Odds on the only off roading most people will be doing is parking up on the grass in the local garden centre but come winter you will have a big advantage using the FWD in high there is little use for the low unless you get snow or end up on a muddy track. Below the multimedia display are the air vents and dials for the heating and Air Con, below that a nice little line of toggle switches I did not investigate 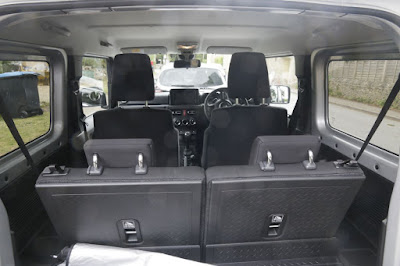 Open the rear door and you find a space just about big enough for a briefcase, or a couple of Golf Clubs, you won't get the bag in. At least the old one would take a suitcase and some shopping 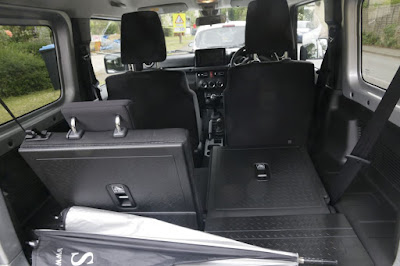 You will have to put the seats down flat to get any suitcases in or your shopping in this one, the seats don't seem to go right down flat either 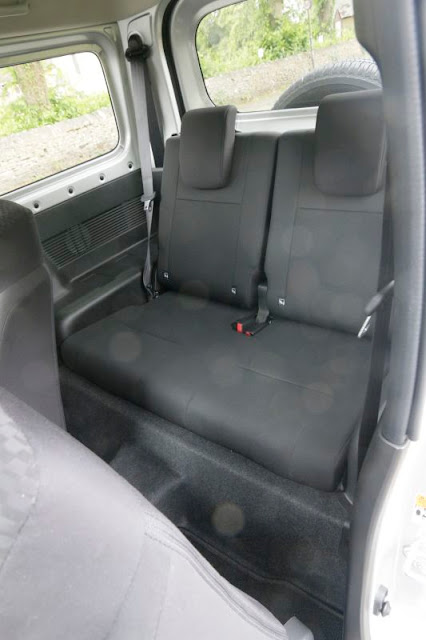 Throw the front seat forward and you seem to have more space in the back for passengers, I did not get in the back but considering the old one was quite cramped it has to be better. Saying that our Jimny has a Dog Guard in it and no rear seat so the dog has more space than we do. Looking towards the back door you can see the seats very close to it but I wonder how often people would be taking any one in the back. 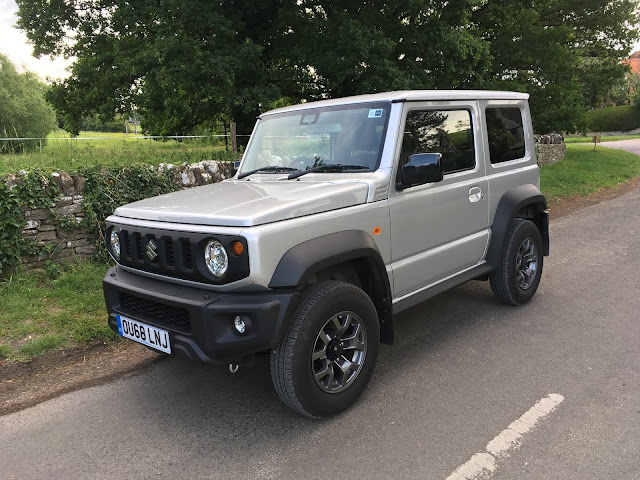 Summing up would I have one? Probably yes but I will not be ordering one any time soon. The dealership said that there were 50 odd people with one on order. Suzuki are only giving the dealer four  this year which means the other forty six have to wait a while for theirs. My VW T6 Van took six months and I wish I had cancelled the order in the end I certainly would not wait any longer for a car. I spent four years restoring a Classic Mini in my spare time is that how Suzuki are making the Jimny. Seriously they really need to speed up production to meet the need here.
Another thing I find I don't like is the colours that you get , Why can't they produce them in some more vibrant colours like yellow or orange. The silver one above is the last colour I would want.
The other thing I was shocked at is the fuel consumption. It's quoted at 39-42 combined our old one does that so no improvement what so ever but then it's rear wheel drive.
Yes it is a good car and fun to drive but I think Suzuki needs to improve a few things like fuel consumption and delivery before I would consider purchasing one.
If you would like to purchase a Jimny or any other car from the Suzuki range the pop along to Sportif Suzuki in Long Hanborough Witney where Nick and his staff will be only too willing to help you out. I might add we have been going there for 18 years for out cars and have found the service there second to none when purchasing a car or having it serviced in the garage,I will be gong back there again for my next car.
Since writing this I have now read that the Jimny will be pulled in 2020, this is due to it not meeting the CO2 Emission's. I would have thought that Suzuki would have built a car that met the new regulations and been more economical like they do with the Vitara or Ignis as it is they should have been looking at a mild hybrid version or even electric which seems to be what other manufacturers are doing now.
I might add I have seen very few on the roads and wonder if people bought them to squirrel away. As much as I like the new car I would not have one because of the high fuel consumption and emission's, I will stick with my Suzuiki Swift and get a 4X4 version when I change
Since writing this first I have seen very few of the New Jimny's on the road but one day I noticed on parked up in our village. These will be as rare as hens teeth soon (you see more of the older ones) as Suzuki no longer sell them in the UK and only they ones on back order will be full filled. I fear it was a big white elephant on Suzuki's part in trying to market them in the UK without looking into emission's. I hope they do think about a replacement which is more suitable but I fear not. 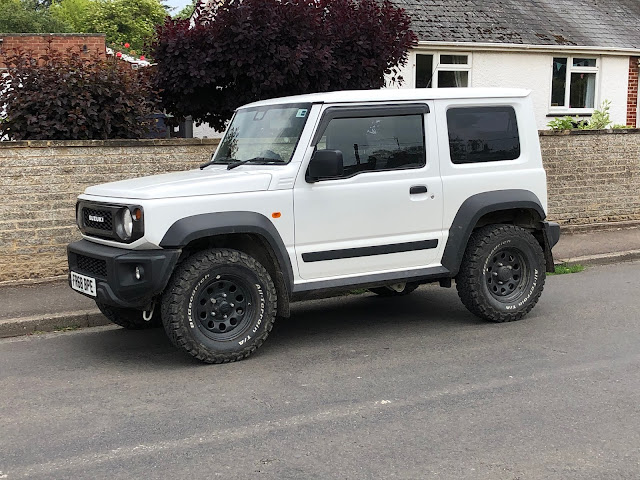 Bit of an update. Suzuki are re-releasing the Jimny as a commercial so it will have no rear seats and the emissions are higher but you will have to pay a higher rate of road Tax. From what I have found out the waiting list is oversubscribed buy people wanting to buy one. These will mostly be opportunists who are  out to make a profit on the car, it happened with the present one before it finished being sold. The genuine owners buy one to drive around and loose out because of the ones who are willing to pay more money for one. I have also found out Suzuki will be bringing out a new Hybrid version in the future so hopefully those poeple who spent vast amounts of money to get one will find their investment drop.
I did get a new car 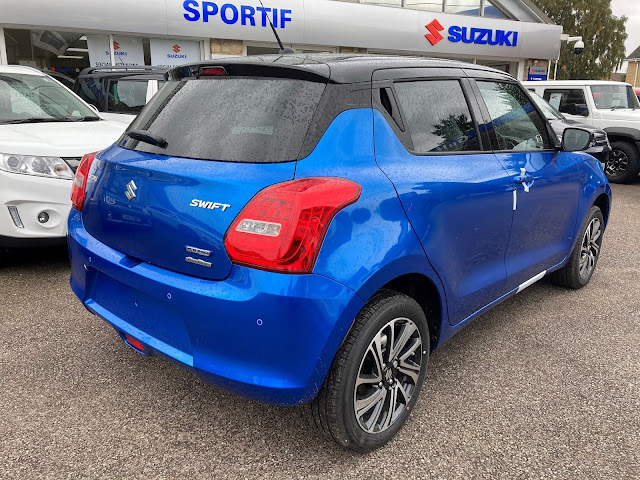 This one a Suzuki Swift Hybrid Allgrip so it has 4X4 capability when needed. The MPH may not be quite as good as my old swift but it sill gets me to the place I go in Wales and back on a tank. If you look in the background you will see a white Suzuki Jimny which was bought by the garage for a vast amount of money from some one who just bought it to sell for a profit it was going for well over £20,000 pounds a lot more that it was bought for and all they did was put fat wheels & tyres on plus some other trash in the back. I would not have given them the money for it but some poor sap bought it.
I'm happy with my Swift but no doubt when they do bring a more sensible Jimny out I will be interested or at least My wife will.
Take Care