Yesterday you were shown the finished Mural that has been painted & hung in the Pavilion in Cholsey. Today I will run though what each of the panels depicts. 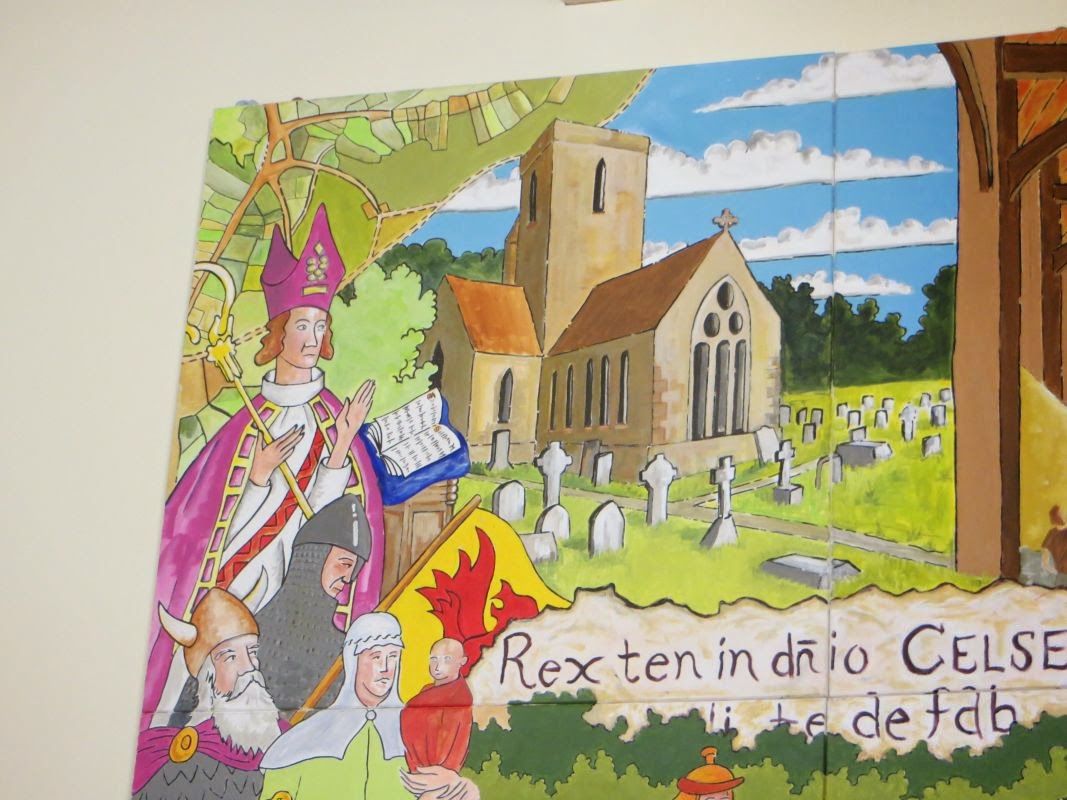 The first panel shows Cholsey Church, an Abbot & some Danes.
The  Abbot was the Abbot of Reading who's abbey used to own the lands round Cholsey, the church was originally built in Saxon times and still has masonry from that time in the church. The Danes sacked Wallingford after rowing up the Thames then popped over to Cholsey stayed the night and sacked Cholsey before heading off over the downs. They were caught & defeated near Winchester 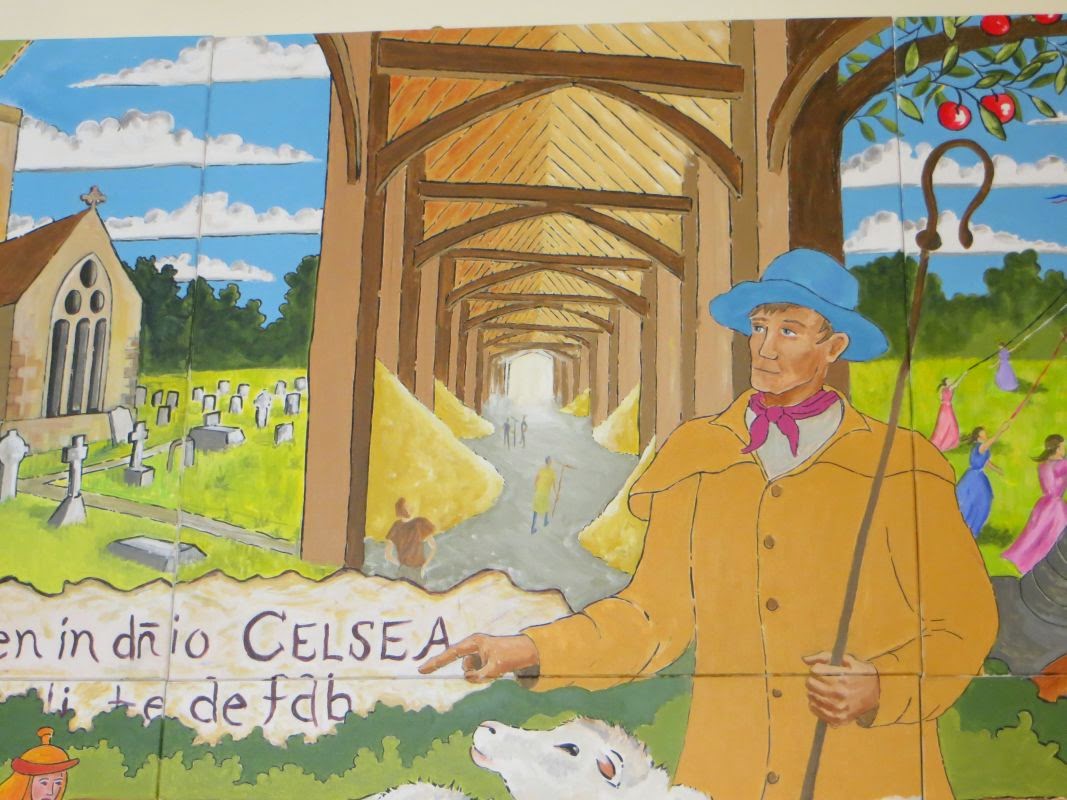 This one shows a Shepherd and a Barn. The Shepherd is there because they used to look drove sheep though the village on the way to Market. The Barn because we had the largest tithe barn in the country at one time before it was demolished in 1815. It was 16 meters high 16 meters wide and 91 long 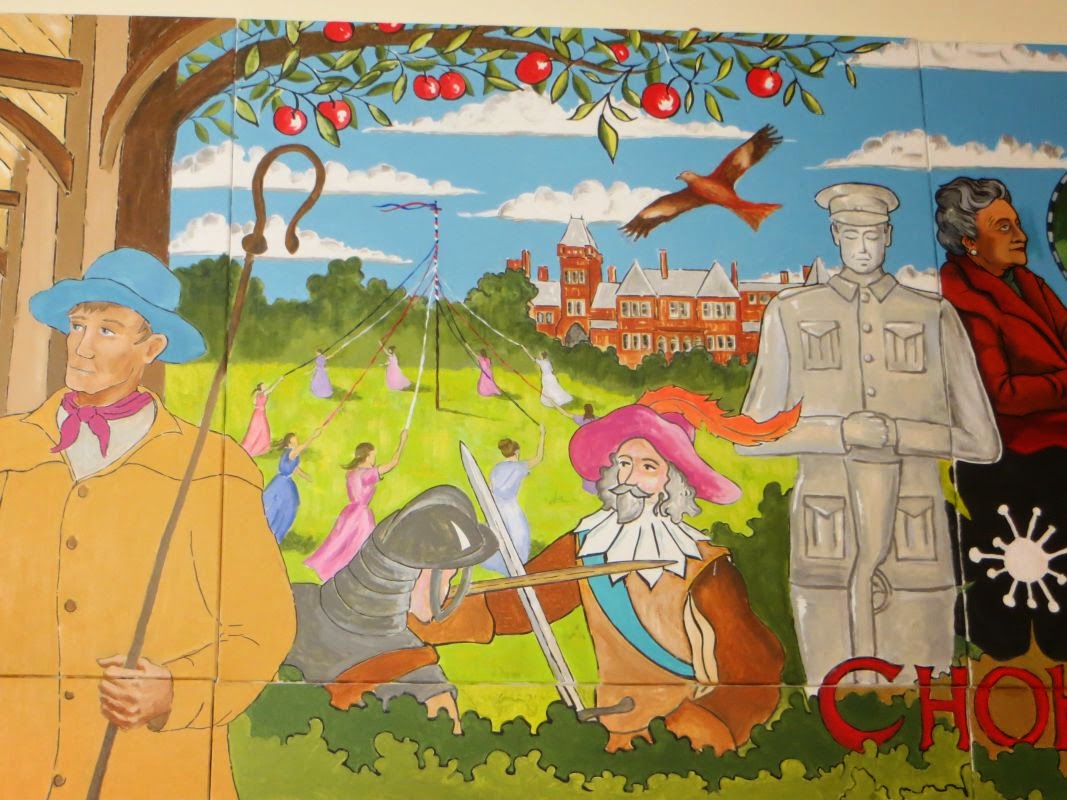 A lot in this one. Maypole, Red Kite, War Memorial , the civil war & Fairmile. The Maypole because Mayday is celebrated in the village and there is dancing round the Maypole. Fairmile because it was the county's asylum at one time employing a lot of the village. The building is still there and converted into flats. Red Kites as they fly round the village. The War Memorial is in the Church and the civil was because it was like other places involved and there was a battle in the Town next door Wallingford. 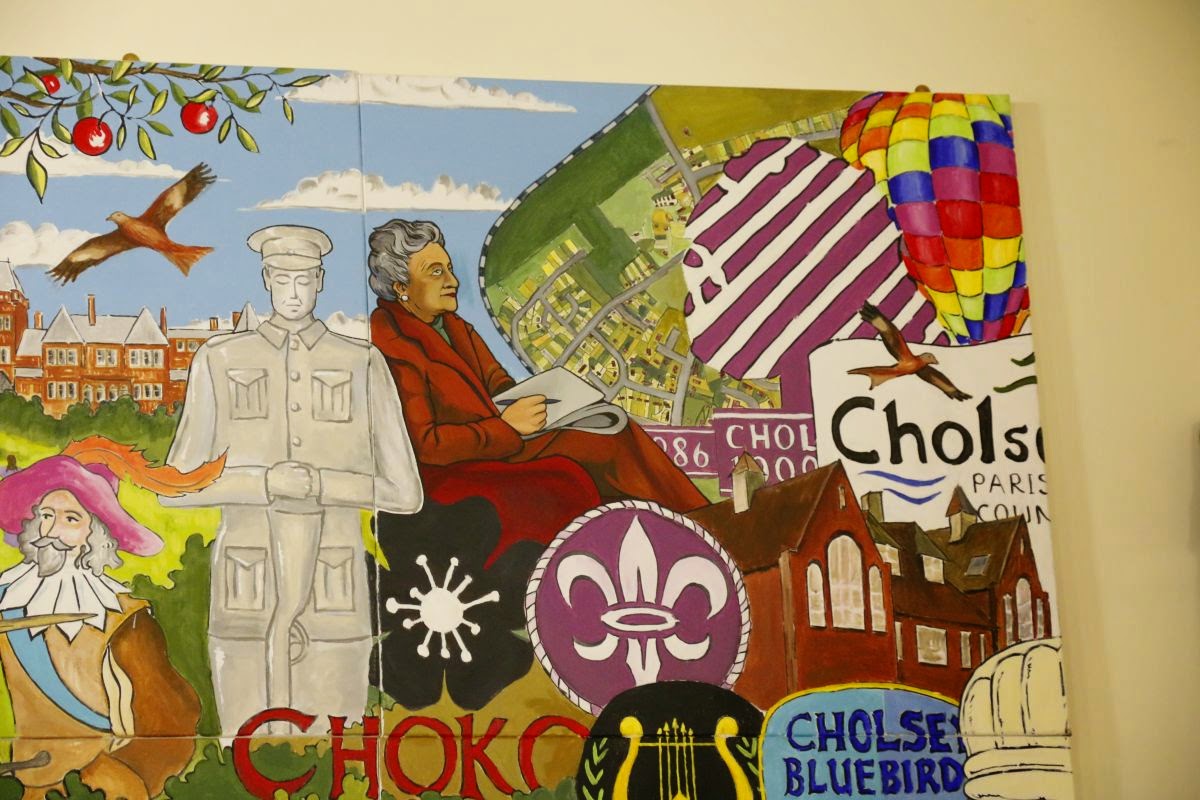 This one has Agatha Christie and Various organisations plus a map and school. Agatha lived in the village at Winterbrook before Wallingford made a land grab and stole the place. She is buried in the churchyard. The school is now a day centre, the map is one of the village. The stripped tree is the emblem of the Forty magazine and is a copy of the horse chestnut tree on the Forty. The Balloon from the event a few months ago. The other two emblems are the scout group and horticultural society. Choko is a charity supporting a village in Africa who put on a good beer festival each year. The harp you see is Cholsey silver band, the bluebirds a children's football team and last the cricket team 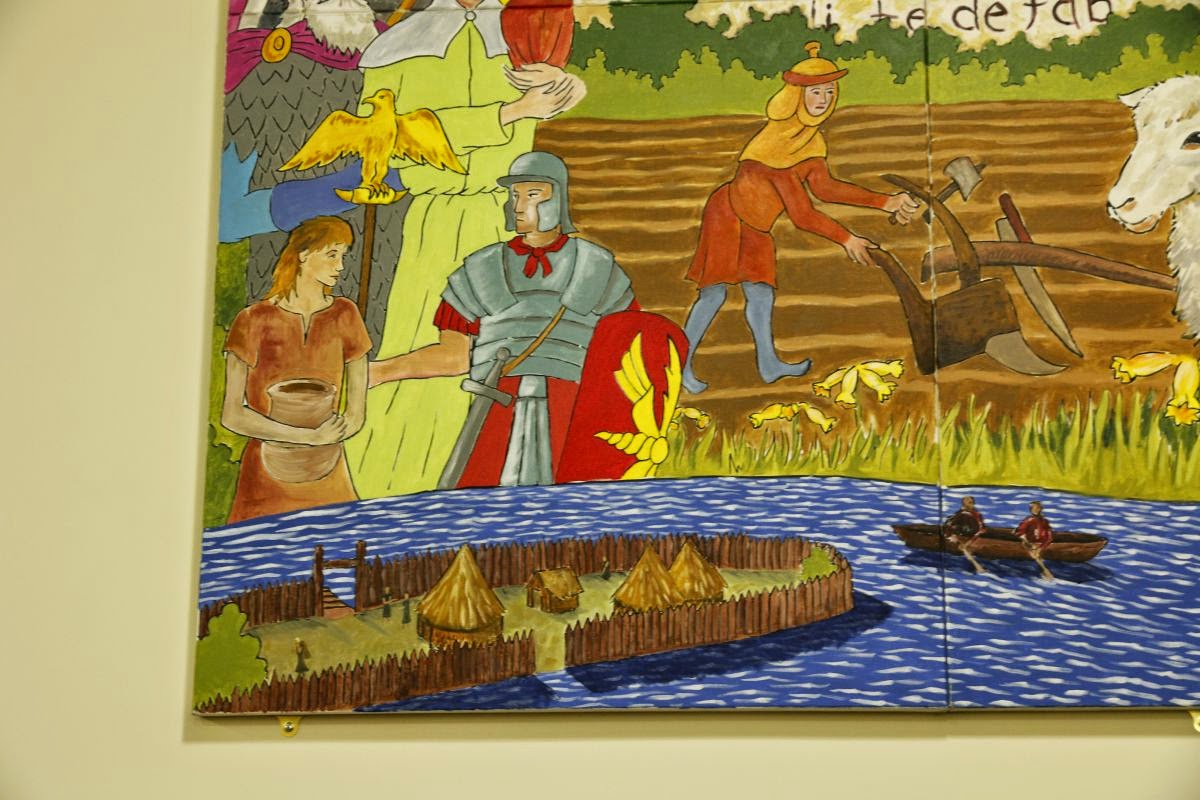 Romans, a ploughman, and the Thames. We have a Roman road runs though the village that if you follow it back will bring you to the North gate at Silchester. Coins have found round the village. The ploughman because of the agriculture here goes way back. The Thames shows a Bronze age village which was found near Winterbrook bridge, you can still make out the islands where it was in the meadows there 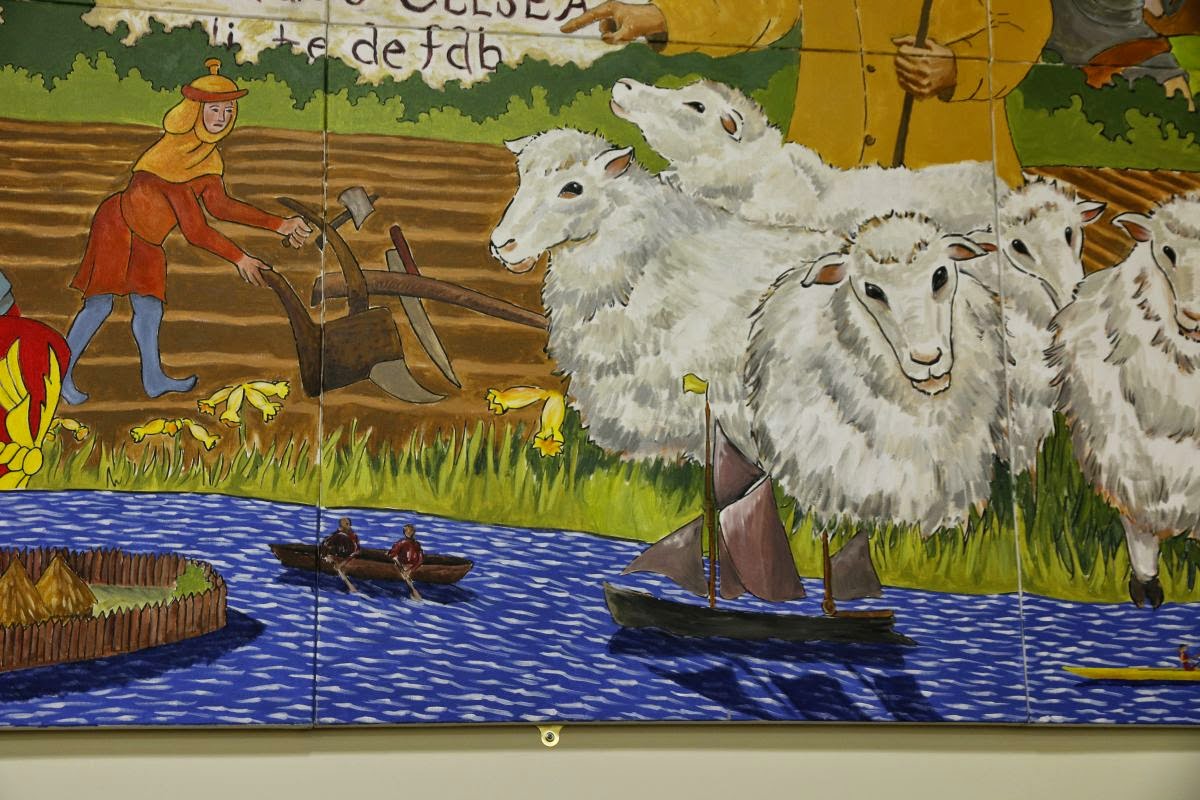 The sheep from where they were driven through the village to market in Wallinford. The sailing boat because that was how goods were transported along the the river years ago. 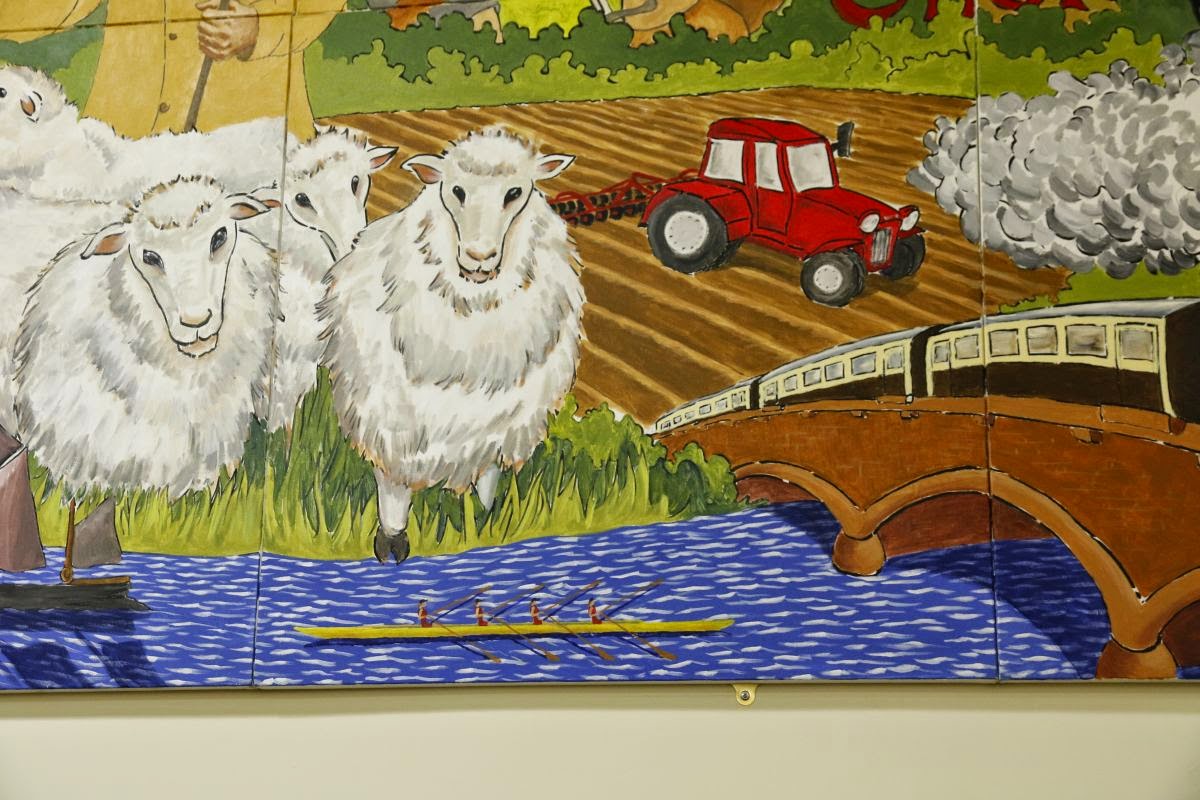 This one shows the sheep and modern day agriculture along with part of the four arches which crosses the Thames outside Cholsey.
Below is a racing skiff which practise along the Thames at Cholsey, there is also one of the Oxford University Boathouses in the Village 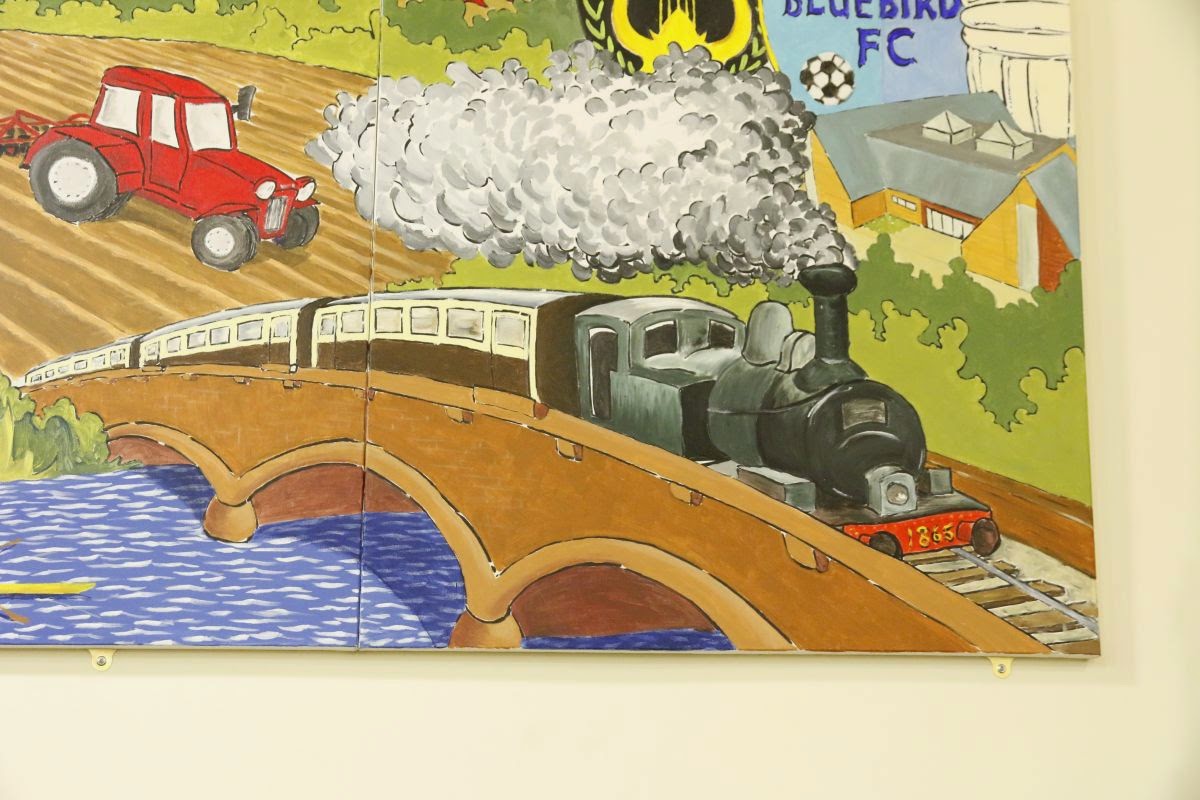 The last one is the Bunk as we called it, the train that used to go between Cholsey & Wallingford. The bridge is a bit of artistic licence as it went under a bridge we called Bunk Arch. No doubt it did run on the main line over four arches. Just above is the pavilion in which the mural hangs.


Hope you have enjoyed my little bit of history on Cholsey as seen through the mural.
Taking Part in Our World Tuesday